Donations – much needed and highly appreciated:

Tikkun Pacov Synagogue Association was established as an apolitical, non-profit, non-governmental organisation (registered charity) in April 2017, with the objective of striving to keep alive the Jewish history and cultural heritage in the Pacov area. Pacov is located 80 kilometres (50 miles) south-east of Prague, with a population of 5,000.

The name Tikkun (Hebrew for repair) implies not only physical repairs to Pacov Synagogue, but also revival of the memory of the lost Jewish community and renewal of their place in history, lest they be forgot.

Tikkun Pacov Synagogue Association successfully raised the necessary funds to purchase the synagogue in 2018 from the previous owner, who used it for storage purposes. Thorough archaeological research then revealed several precious historic finds, and the synagogue was recently registered as a cultural heritage site. It is now in need of urgent repair and renewal to avoid collapse.
The last members of the once-thriving Jewish community were deported to Theresienstadt Ghetto in November 1942. There are few visitors to the Jewish cemetery, and the dilapidated former synagogue lies neglected and obscured from view in this lovely town with beautifully renovated palace, church and main square.
Pacov residents welcomed Nelly Guttmann, daughter of the last rabbi, when she visited in June 2017 from her home in Israel, a survivor of Theresienstadt Ghetto and Auschwitz. This marked a first revival of interest in the history of our former Jewish neighbours, victims of the Holocaust, who must never be forgotten. We can best honour their memory through the renovation of Pacov Synagogue, as the most significant Jewish landmark, and the establishment of a museum/memorial to the former Jewish community..

History
Pacov Synagogue was built in approximately 1823 by local architect Tomáš Polívka, to replace a small prayer room in the attic of Wolf Meller’s nearby house. A small house annexed to the synagogue was the home of a shamash (sexton) paid by the community, and later served as the schoolmaster’s house. The rabbi shared house no 315 with the local Jewish school. The fire of September 1864 left only the perimeter walls standing; the rest was rebuilt in Neo-Romanesque style over the following years. Inside there were 100 seats for men and another 60 gallery seats for women. Services were conducted here until autumn 1941, when every synagogue in the Protectorate of Bohemia and Moravia was closed down.

The Jewish community of Tábor obtained the synagogue after the war but sold the building to a state-owned distillery and yeast-manufacturing plant in Kolín in 1952. From 1956 it was used as storeroom and business premises for a cooperative farm. This was followed by continuous storage and commercial use by a string of private owners after 1989. The community archives, furnishings, and religious artefacts, including nine Torah scrolls (the Torah being the cornerstone of the Hebrew Scriptures) were moved to the Jewish Museum in Prague during the war, thanks to the Jewish Community of Prague, which managed to obtain approval from the Nazi authorities. The Torah scrolls included those originally owned by the Jewish communities of Hořepník and possibly Lukavec, which fell under the jurisdiction of Pacov in the late 19th century. 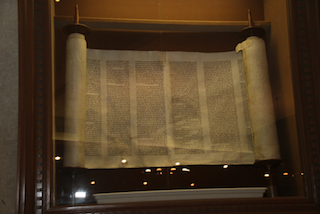 The Communist government sold the Pacov scrolls in 1964, together with 1,500 other Torah scrolls and cloth mantles from all over Bohemia and Moravia, to Westminster Synagogue in London, which set up the Memorial Scrolls Trust to protect and restore these valuable relics. The Torah scrolls rescued from Czechoslovakia during World War II remain treasured highlights of museum collections and Jewish communities all over the world. 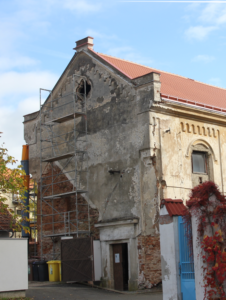