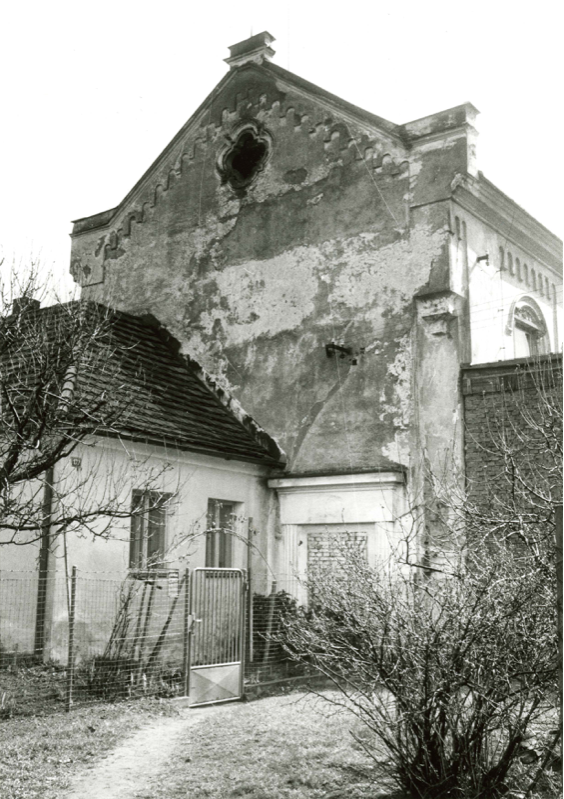 A period photograph of the synagogue (by unknown author).

The synagogue has been standing in the alley connecting Jan Autengruber Street with Náměstí Svobody Square within the Pacov urban heritage area for almost two centuries. A house with chamfered corners, saddle roof, and two gables facing east and west, its south facade now fronts the yard in front of a bottling plant owned by the Crystalis Co. It was built in the Classical style no later than 1823 next to or possibly instead of the house Number 177 which the local Jewish community bought in 1809 from one of the burghers, a locksmith named Matěj Volyňský. The construction plan was drawn up by the local architect Tomáš Polívka in 1811. The synagogue replaced an unsatisfactory prayer room in the attic of Wolf Meller’s house (possibly the eastern part of today house No 172). A smaller house west of the synagogue – the home of a shamash or sexton paid by the community – later served as the schoolmaster’s house, while the rabbi shared the house No 315 with a Jewish school. The fire of September 1864 left only the perimeter walls standing; the rest was rebuilt in the Neo-Romanesque style using both brick- and stonework during the following years. Inside there were a 100 seats for men and another 60 gallery seats for women. Services were conducted here until the autumn of 1941 when every synagogue in the Protectorate of Bohemia and Moravia was closed.

Having obtained the synagogue after the war, the Jewish community of Tábor sold the building to a state-owned distillery and yeast-manufacturing plant in Kolín in 1952. From 1956 it was used as a collective farm’s storeroom and business premises. Even after 1989 the synagogue continued to be utilized for storage and business purposes by a string of private owners. The community archives, furnishings, and liturgical equipment including nine Torah scrolls (the Torah being the cornerstone of the Hebrew Scriptures) had, however, already been shipped to the Jewish Museum in Prague during the war thanks to the Jewish community of Prague, which managed to gain approval of the Nazi authorities to recover the religious artifacts. Said scrolls included those originally owned by the Jewish communities of Hořepník and possibly even Lukavec which were subsumed by Pacov in the late 19th century.

In February 1964 the Communist government sold the Pacov scrolls – with over 1,500 more scrolls and cloth mantles from every part of Bohemia and Moravia – to Westminster Synagogue in London, which set up the Memorial Scrolls Trust to protect and restore these valuable relics. The scrolls rescued from Czechoslovakia during World War II are now the treasured highlights of museum collections and Jewish communities all over the world.

Nowadays, the synagogue remains the primary tangible evidence of centuries of Jewish presence in Pacov. A notable example of the Neo-Romanesque provincial style, its restoration and conservation has been already endorsed by an architectural study developed in 2015. A growing interest in the Jewish history, shown by the local as well as foreign visitors to Pacov, demands that it happen as soon as possible.