The only surviving member of the family

Jaroslav Lustig was born on January 13, 1911 in Lukavec near Pacov, where his father Alois Lustig ran a general store. He was married to Milena Bohumila Lustigová, née Poláčková, daughter of Emanuel Poláček and Marie, née Tellerová (b. January 13, 1910, Pacov). They had a son Jiří born December 3, 1939, in Pelhřimov. They lived in Pacov No. 437.

In 1929 at the age of eighteen, Jaroslav Lustig was employed at the Lederer Brothers Company in Pacov. He worked first as a store employee, a traveling salesman, and later as a store manager. In October 1940, as a result of the anti-Jewish laws, the company fell under forced management and Lustig was fired. In January 1941, he moved to Kamenice nad Lipou with his family where he worked in a newly established group of forestry workers.

All Jews from the Oberlandrat region of Německý Brod (now Havlíčkův) were deported to Tábor on November 9, 1942, and then to Terezín on November 12, 1942 (transport No Bz 606).

Men and women were lodged separately in Terezín and children under twelve were allowed to stay with their mothers. Older children were sent to the Children’s Home, or “Kinderheim”, and were allowed to meet with their parents once a week.  Jaroslav Lustig arrived with his wife and a three-year old son, his parents, sister, brother-in-law and other relatives. His parents and sister along with her husband  were deported from Terezín on January 20, 1943, probably to Majdanek in Poland, where they perished.

Jaroslav Lustig was “lucky”, as he was chosen to work at an “Entwesung”,  a disinfection station in Terezín. Prisoners who came to Terezín from other concentration camps were heavily lice-infested, creating the danger of a typhus epidemic. “There were three of us, two men and a woman, an older nurse. We had a  mobile sitting bathtub and visited various blocks where we disinfected all prisoners. In a short time the disinfection process was extended. The deloused clothing was gassed with Cyclon B2 in special chambers, and there were established showers and baths to prevent a typhus outbreak.

Workers were renumerated with so-called ‘ghetto money’ that could be spent in special shops for the prisoners where they could buy worn clothes or food. The ghetto cuisine was terrrible and insufficient, as meals were cooked on a mass scale. The prisoners, mostly elderly, were forced to queue up for a modest ration of poor quality meals. Many transports arrived in Terezín, not only from the Protectorate of Bohemia and Moravia, but also from other occupied countries in Europe. Large quantities of newly arriving prisoners resulted in overcrowded dwellings. People started to be sent to Auschwitz. All of us knew what it meant to be enlisted in a transport – a certain death.”

Jaroslav Lustig’s family members were enlisted in a transport to the east in April 1944. His direct supervisor succeeded in “reclaiming” them from this particular transport, however, they were included in another transport No  Eb 1278 on May 18, 1944. After their arrival in Auschwitz-Birkenau, they were ordered to leave their luggage in railway cars. They did not go through the selection process, but were sent to the so-called Family Camp BIIb, where men were separated from women and children. Each of them was tattooed with a number on his or her left forearm. Jaroslav Lustig’s number was A–1682.

“The prisoners showed us smoking chimneys and told us this also was to be our fate, as we would be cremated. Individual camps were separated by barbed wires and we could see what was happening in neighboring camps. Next to us there was a camp for Hungarian Jewish women,  who were very brave as they were standing naked on the ‘Apelplatz‘, a platform used for roll calls, for hours without any food, water, or sleep. I was working in the disinfection department again, with the supervisor of the Terezín disinfection center, who had also come with our transport to Auschwitz. I was in charge of some five-hundred prisoners in block 5 in our BIIb camp.”

At the beginning of July a selection process began in the family camp with all the young men and women being selected out for work. Before July 13, 1944, older people and women with their children perished in gas chambers, among them was Jaroslav Lustig’s wife Bohumila and their almost five-year-old son Jiří.

“In front of the barrack of Dr Mengele prisoners were ordered to strip naked and run into the building where Dr Mengele decided between life or death for each of them by the point of his finger. I was thirty-three and was selected to remain alive. Our hair was cut and our entire body was shaved and showered. We were given striped clothes and stood waiting for transport in cattle cars, without any food or water, to Schwarzheide, a branch of the Sachsenhausen Concentration Camp.”

Schwarzheide Labour Camp was located near the secret plant for production of petrol from brown coal, called BRABAG (Braunkohl-Benzin-Aktion-Gesellschaft). The plant had been bombed by Allies and the prisoners’s task was to reconstruct it. Groups of about twenty men were set up, supervised by a SS-man and two other guards. Jaroslav Lustig was assigned to the so-called Baukomando, or building group, which had to carry bricks, unload wagons full of cement and sand and work in severe weather conditions. Only three-hundred men out of one thousand survived.

On April 19, 1945, all prisoners were dispatched from the camp in a death march. Jaroslav Lustig, who was then lying in the camp hospital, was carried onto an old bus. There was a gas chamber built in Schwarzheide, however, there was not enough  time to put it into operation because of the approaching frontline. On Friday, April 20, 1945, sick prisoners were taken to Sachsenhausen to be killed there the following Monday. 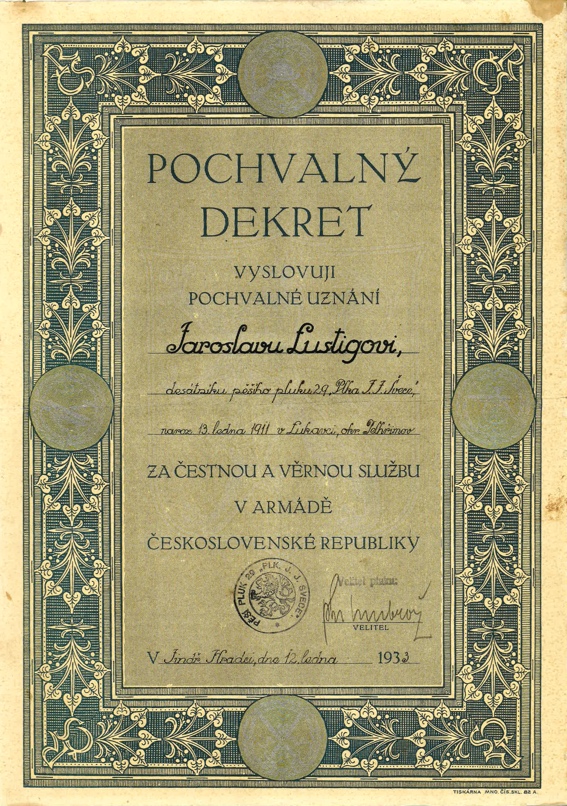 Certificate of praise for military service

The next day a death march of some 25,000 prisoners was dispatched from Sachsenhausen to Neuengamme Concetration Camp in Hamburg. Sachsenhausen was liberated on April 22 and 23, 1945, by Soviet and Polish troops. One of the 3,000 prisoners who was unable to march and therefore stayed in the camp was Jaroslav Lustig, who at that point weighed only 80 pounds (36 kilograms).

Jaroslav Lustig returned to Czechoslovakia on July 25, as the only survivor of his entire family. He underwent treatment at the pulmonary sanatorium in Bukov near Ústí nad Labem, in Northern Bohemia. In November 1945, Lustig returned to work in the re-established Lederer Brothers Company in Pacov. He re-married and had children. He died in Pacov on March 9, 1987.