All his friends kept coming up to greet him

Leopold Pachner (b. September 20. 1897) was born to Anna Pachnerová, née Schlesingerová (daughter of Bernard Schlesinger and Josefina Kohnová of Golčův Jeníkov). His father, Adolf, died in 1925. Leopold had a brother who died before the war, and a sister who perished in a concentration camp.

Leopold Pachner ran a business in Pacov that sold fine leatherware (purses, wallets, etc.). He regularly visited Paris in order to follow fashion trends and he also rented a room in a hotel in Prague where he met his business partners and clients. His mother managed a notions store in Myslíkova street No. 74, where Leopold was born.

In 1939, Leopold Pachner spent some time in the United Kingdom, but returned to Pacov when his mother fell ill. After the occupation of Czechoslovakia, his property was expropriated to a German manager. Leopold Pachner was deported to Terezín on November 13, 1942 on transport No. Cb-76. He managed to survive the war, although his mother perished on December 15, 1943 in Auschwitz. 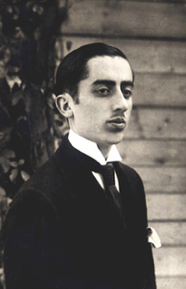 After the war, Leopold returned to Pacov. Step by step, he was able to re-establish ownership of his property, and renew his business. In 1948 he decided to emigrate to Israel, but this plan never came to fruition. Pachner had sent his secretary ahead to prepare everything necessary to transfer his business dealings to Israel, but the plane he was traveling on was shot down above Cyprus. Leopold then tried to travel to Israel aboard a ship, but it was not possible to leave the country after the Communist Putsch of February 1948. Leopold Pachner kept his trunk as a memory of his dream of emigrating to Israel.

After the 1948 Communist Putsch, his property was nationalized, including his home in Španovského street No. 174, which was then divided into flats. Leopold Pachner lived in a one-room flat with a kitchen for which he had to pay rent. He was employed in a municipality company and where he was in charge of employee recreation. In 1950 he built a small weekend house near Pacov and spent the last year of his life in a care home, Proseč u Pošné, near Pacov, where he was cared for by nuns. He died on May 26, 1969 and was the last Jew buried at the Jewish cemetery in Pacov.

Leopold Pachner with his friends

His daughter Františka Adamová (nee Králová-Pachnerová), was born in 1925 and died on January 14, 2015, just short of her 90th birthday. Františka’s mother died during the Second World War. Františka hid herself in Malá Skála near Turnov in Northern Bohemia, during the war. A local policeman warned her in advance of Gestapo inspections and the hotel Kafka supplied her with food. After the war she returned to Pacov and lived with her father until 1949. when she married and moved to Prague. Despite her father’s wish that she not marry a Jew, she did, but her father nevertheless kept contact with her and her family over the years.

Leopold’s granddaughter Zuzana remembers regular visits of her grandfather in Pacov, walking with him across the main square, which took almost an hour, as his friends would come up to talk with him during their stroll.

From the archives of the Auschwitz museum

Leopold Pachner’s sister Marta Lewitnerová (b. May 2, 1896 – d. October 18, 1942) was married to Josef Lewitner (b. March 1, 1888). They had two children, Pavel born on December 29, 1928 and Karel born on March 22, 1931. Marta was arrested for unknown reasons in March 1942, ie. even before the November transport. At first she was held prisoner in the Theresienstadt Small Fortress, then since April 18 in the Ravensbrück concentration camp, and eventually since October 5 in Auschwitz where she died of “overall body weakness” in less than two weeks. The last chairman of Pacov Jewish religious community, Dr Leopold Wertheimer, was arrested less than a month later than Marta. He was imprisoned in the Theresienstadt Small Fortress on April 20 and at the beginning of May was moved to Auschwitz where he died on the 1st of June. Marta’s husband Josef and both sons were deported to Terezín in 1942 and perished on May 18, 1944 in the so-called Family Camp in Auschwitz-Birkenau.

We use cookies to ensure the best experience on our website. If you continue to use this site we will assume you are happy with it.Accept